Analyzing liquid and solid samples from inside the pipeline including microbially influenced corrosion (MIC), and measuring weight loss coupons in MPY (millimeters per year) produces the most accurate assessment of the internal pipeline condition.

FREE TRIAL. There is no cost to participate in the Excalibur Shield Pilot Program. We offer a free 60-day trial of the Excalibur Shield AND detailed video instruction for the installation, removal, sample collection and analysis. Please contact us for this value-added, educational based service. 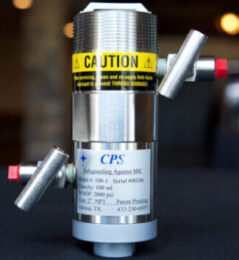 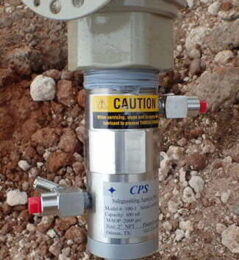 In the case study, the Excalibur Shield was employed at a West Texas liquid pipeline system to collect solid samples, chemical residuals, analyze for MIC and monitor weight loss coupons at the worst case scenarios on a 20-mile long, 10” carbon steel condensate pipeline operating at 700 PSI with a 50% shut down rate.

The internal pipeline condition was ideal for bacteria growth and microbially influenced corrosion, and the pipeline system was being monitored only by a retriever style coupon (Figure 1). The pipeline segment was suffering from a lack of internal monitoring, corrosion rate monitoring at the most severe locations and insufficient solid and liquid sampling for analysis.

The pipeline operator was injecting biocide and corrosion inhibitors with minimal opportunity to monitor the effectiveness, and testing of the chemical treatment was only available while the operator used a maintenance cleaning pig. The cleaning pig cycles were not coordinated with the field pipeline technician or corrosion technician during the pig runs. For example, the corrosion technician was usually notified weeks after sample collection. The corrosion control program lacked proper corrosion identification, personnel coordination, maintenance mechanisms and optimization of chemical treatment program.

The only effective analysis was the retriever style coupon (Figure 2). The weight loss coupon measured 2” x ¼” in diameter and was installed and exposed to the internal pipeline conditions for 117-days resulting in a 0.17 MPY metal loss rate. The corrosion rate is expressed in mils per year (MPY) with one mil equal to one-thousandth of an inch of metal loss inside the pipeline at the coupon surface over a 1-year period.

The localized average corrosion and pitting rates from the coupon are categorized as low, moderate, high, and severe in accordance with AMPP classification SP0775-2013 (Table 1). Ideally, coupons are inserted at the 12 o’clock position and lowered to the 6 o’clock position in a horizontal pipeline. The placement of the coupon is the most critical decision in determining the most accurate internal corrosion rate. In this case study, only the tip of the coupon was exposed to the worst conditions in the pipeline.

After discussion, the client and operators agreed to the most representative locations and the most severe location with respect to corrosion. Many operational and environmental conditions influence the optimal selection of location, thus, it is best served when the decision is made by the entire team. We installed the Excalibur Shield at the worst case location, or lowest lying area of the carbon steel condensate 10” pipeline, and again at the end of the 20-mile segment where the pig receiver is at the six o’clock position (Figure 3 and Figure 4). 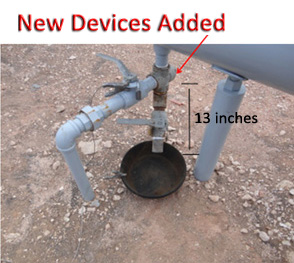 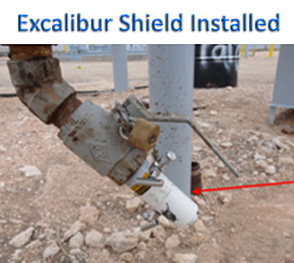 The Excalibur Shield was installed on the existing infrastructure requiring only 13″ minimum clearance and no welding. The existing sump tank drainage piping system (Figure 3) was used to install additional fittings to accommodate the Excalibur Shield (Figure 4). After installation, we established the capability of acquiring solids, liquids, and monitoring the weight loss coupon at the worst case scenario.

The Excalibur Shield has a primary filtering system at the mouth of a 100-millimeter cavity. The coupon is installed inside this cavity with a secondary filter system surrounding the coupon. The outer portion is octagon shape for easy installation and removal and including a drain with ventilation valves for easy collection of fluids inside the cavity. The base adapter is outfitted with an O-ring seal for easy removal and secure sealing capability using a 316-L stainless steel body, rated at Maximum Operating Pressure (MOP) of 2000 PSI (Figure 4). 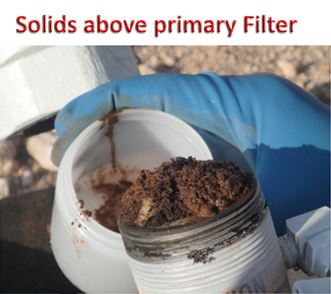 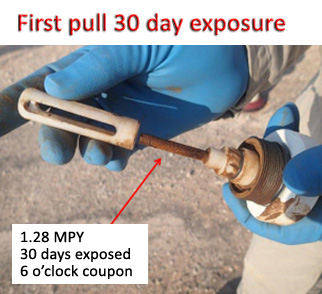 After the first 30-day period of exposure to the internal pipeline conditions, the weight loss coupon registered a 1.28 (MPY) wall loss rate at six o’clock, compared to the 0.17 (MPY) estimated by the previous 117-day exposure using the retriever coupon (Figure 2) mimicking the low lying area in a worst case scenario. We also acquired fresh solid samples (Figure 5) and liquid samples (Figure 7) from inside the pipeline to establish the presence and concentration of bacteria colony counts in milligrams to grams at the sampling location.

In this case study, tests for acid producing bacteria (APB) and sulfate reducing bacteria (SRB) showed very low counts for these organisms. Going forward, our clients now have the capability of collecting fresh liquid and solid samples internal to the pipeline for a more accurate assessment. 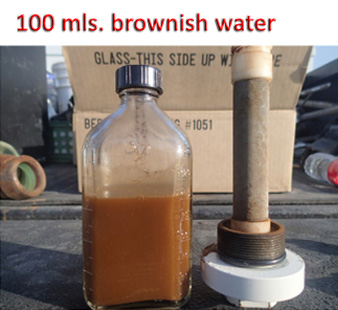 After a second 30-day exposure and optimization of the chemical inhibitor resulted in a 0.08 MPY (Figure 8) loss rate using the Excalibur coupon data, which is 94% reduction in the previously measured internal corrosion rate. This case study demonstrates the retriever-style coupon and irregular sampling prior to the Excalibur Shield use was insufficient. Fundamental awareness and coordination were lacking and this case study highlighted the need for a new corrosion program.

In Summary, acquiring samples at regular intervals, corrosion rate monitoring with coupons in worst-case scenario, fluid sampling, solid sampling and inhibitor treatment under the umbrella of the Excalibur Shield provided our client with a vastly improved corrosion monitoring, assessment and control program. 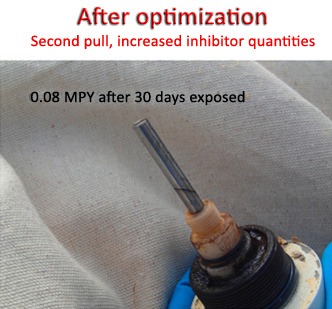 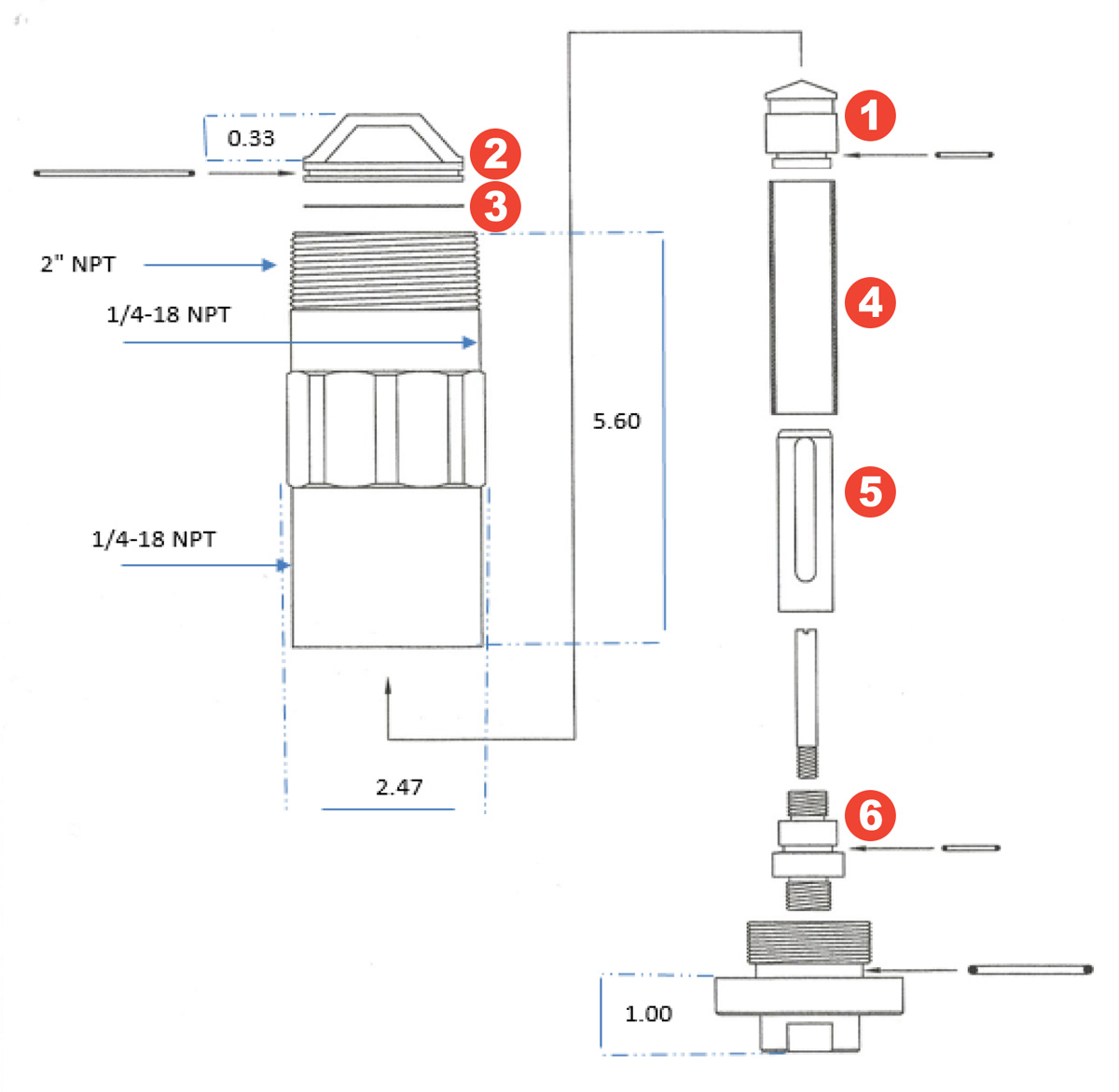 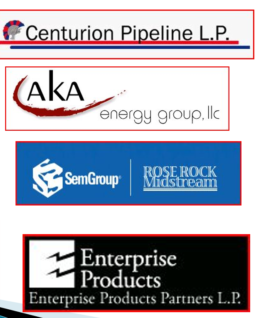 With the Excalibur Shield, we’ll provide free consulting on the Excalibur Shield and the internal corrosion control program. You can utilize our experience to ensure you are successful. Consulting includes education, suggested installation locations on the pipeline system, coordination of personnel, maintenance procedures, data analysis and chemical treatment optimization.

FREE TRIAL. There is no cost to participate in the Excalibur Shield Pilot Program. We offer a free 60-day trial of the Excalibur Shield AND detailed video instruction for the installation, removal, sample collection and analysis. Please contact us for this value-added, educational based service.